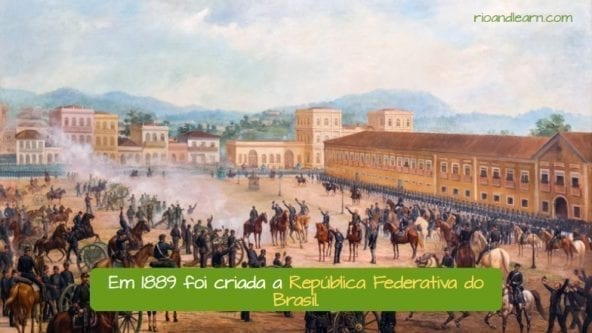 What’s up, fellas! Let’s learn about the Brazilian Republic Day! In our A Dica do Dia today we’ll understand more about this holiday that is so important to Brazilian hearts.

When is Brazilian Republic Day?

History of the Republic Proclamation Day in Brazil

The Proclamation of the Republic was a great event in the history of Brazil because it made the country improve in political, economic, and social matters. It is one of the most important holidays from a historical perspective in Brazil.

The independence of Brazil happened in 1822 and with it the country started to be ruled by a king named D. Pedro I. As he gave up power, his son D. Pedro II, who was only five years old at that time, took on the power in his place.  Years passed and the monarchy of D. Pedro II was not going very well. There were crisis, there was no freedom of speech, and peoples’ rights were simply ignored.

It was through the dissatisfaction of the people that, on the 15th of November of the year 1889, Marechal Deodoro da Fonseca and the republicans who supported him decided to lead a military coup that ended the monarchy and permitted Brazil to have its first President in charge.

Since then this date is one of the most important in Brazil because it represents the fight of the people for their rights and for their future.

What about you? What date do you consider to be important for the history of your countries? See you on our next Dica, fellas! And you can also check out our previous Dicas here.