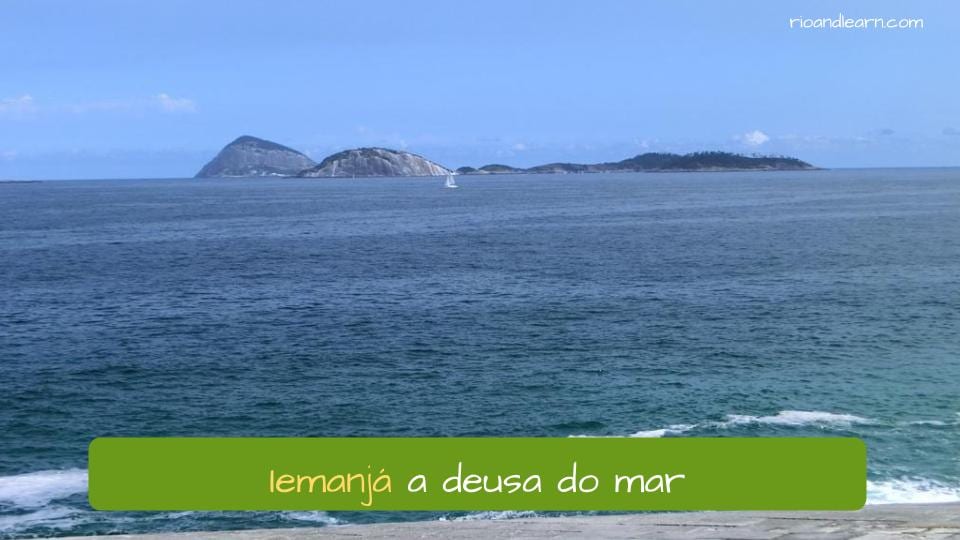 Hello, guys! What have you been doing out there? Today we are going to talk about one of the most important figures of Brazilian Candomblé and Umbanda religions: the Orixá Iemanjá. Did you know Iemanjá is one of the most known religious figures in our country? Iemanjá in Salvador is one of the main religious figures. On the other hand, Iemanjá in Rio de Janeiro is so famous, that New Year’s Eve has a ritual just for her. So, let’s learn a little bit more about her, the story behind her legend, and also the relationship between her and New Year’s Eve! Ready to learn Portuguese online? Let’s see today Iemanjá in Brazil!

With the arrival of the African slaves, brought by the Portuguese from their colony in Africa, their religions spread to many countries in South America, including Brazil. One of the best-known figures of the Afro-Brazilian religion of Candomblé is Iemanjá. Candomblé claims that Olorum (a figure that would resemble the Christianity God) created the world using seven deities known as Orixás:

Iemanjá is the deity of fertility, originally associated with the sea and salt water. She protects fishermen and sailors as well as children. A very powerful deity, her power reaches into all aspects of femininity thus fertility and the family; she is usually depicted as a mermaid and is always dressed in blue or white.

In Brazil, she became the most popular Orixá, therefore profoundly influencing popular culture, music, literature and religion, and is worshiped through popular rituals. The influence of Iemanjá in Rio de Janeiro, for example, is so strong, that during the New Year’s party in Rio de Janeiro, there is a ritual for her. And it doesn’t really matter your religion: even if they don’t follow Candomblé, some Brazilians from different religions pay their respects to Iemanjá in Rio de Janeiro after midnight.

Iemanjá in Brazil: Celebration in Salvador

The largest celebration for Iemanjá takes place in the Rio Vermelho neighborhood, in Salvador, on February 2 of each year. The Iemanjá Festival is the largest public religious manifestation of Candomblé in Brazil. The tradition of the procession of Iemanjá in Salvador, in the Rio Vermelho neighborhood, began in 1923. After a terrible period of scarcity in fisheries, the fishermen got together to make an offering to Iemanjá, asking her to have mercy and grant them a calm sea and lots of fishes. Since then, Bahia celebrates this day every year.

The festivities actually start on the night of the 1st, at Casa de Iemanjá in Rio Vermelho. There, believers spend the night singing and celebrating the deity, to the sound of drums typical of religions of African origin. A big boat is created, where the believers put their gifts to Iemanjá. Close to sunrise, the believers go to the beach, where they continue singing and playing their drums, to receive the sunrise of Iemanjá in Salvador with great joy. The boat with offerings, made the night before, is taken out to sea by fishermen at exactly 4pm on February 2nd. Some consider that the 2nd of February is so important that it is the “New Year of Bahia”.

In Rio de Janeiro the celebration takes place twice. On January 1, as a good auspice for the New Year; and officially on February 2nd. A procession of the faithful, dressed in white and blue, parades from the center of the city to Copacabana beach.  Some even enter the sea and jump over seven waves (symbolizing the 7 Orixás) to get closer to the goddess.

To honor Iemanjá, many throw flowers into the sea and additionally offer gifts from the shore. Some believers often cast out into the sea small replicas of boats, made with statuettes of Iemanjá. They also include white food (such as sweet rice and coconut puddings). If the small boats return to shore, it is believed that they were rejected by the goddess, but if they continue to be carried off by the sea, the offering has been accepted and Iemanjá will bless them.

We hope you have enjoyed knowing a little more about the Brazilian Candomblé religion and that you might, one day, come and study in Brazil during these celebrations! We would love to guide you through Brazilian’s culture!
See you in our next A Dica do Dia!
A big hug from Rio & Learn.

Click in the links below to see more related Dicas
Oxalá in Portuguese
Brazil and Religion
Candomblé in Brazil
St. George’s Day in Brazil