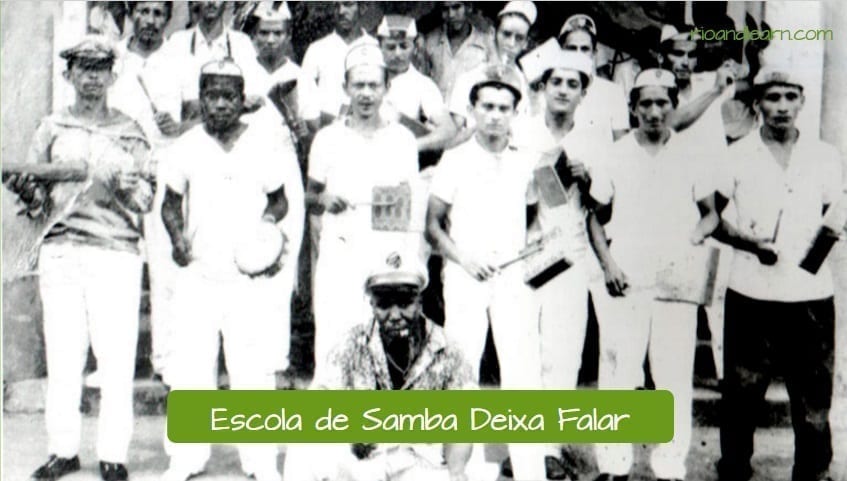 How do you like samba? Listening to some marchinhas de carnaval while sipping coconut water on Copacabana Beach doesn’t sound so bad to me. But for today’s Dica, we’ll dig a little bit deeper than that. We’ll learn about Deixa Falar – the first samba school in Brazil.

The History of Deixa Falar and Samba

In 1928, Brazil saw its first samba school. It was named Deixa Falar (let it/them talk). As the city of Rio de Janeiro grew, the poorer classes were forced to move out to the slopes of the hills and the city outskirts. That gave rise to what is now known as favelas or periferias. There composers, musicians and sambistas (samba musicians) from the black community, through a combination of rhythms and ideas, came together to found the very first samba school in the country.

Back then, samba had become synonymous with crime in the eyes of the law, and a person could be arrested for jaywalking if the police saw them sambando (dancing samba) on the streets. Because of this negative image of samba, the police closely monitored the small parade.

The End of Deixa Falar

Deixa Falar was a short-lived experiment in samba – it disappeared in 1930. However, it contributed greatly to the growth of the samba culture in the city of Rio de Janeiro. The surdo de marcação that helps to mark the pulse of the music, and the tamborim, were instruments that were left behind as an inheritance from the school. Both of them were created by Alcebíades Barcellos (nicknamed Bide), one of the founders of Deixa Falar samba school.

It was only in 1935 that government institutions finally began to allow samba school parades to happen. And yet it took many more years for samba history to begin to be appreciated. The first book to ever tell the story of Deixa Falar was only published in 1950 – twenty years after the first samba school in Brazil had come to an end.

The most important schools of that period were Portela and Mangueira. Portela introduced the idea of telling a story in their samba parades, as well as the front line commission (ten to fifteen dancers who start the parade) and the use of decoration and images (alegorias) to help tell the story chosen by the samba school. Mangueira was known for being the most traditional of all samba schools, and it emerged from the union of several carnival blocks. 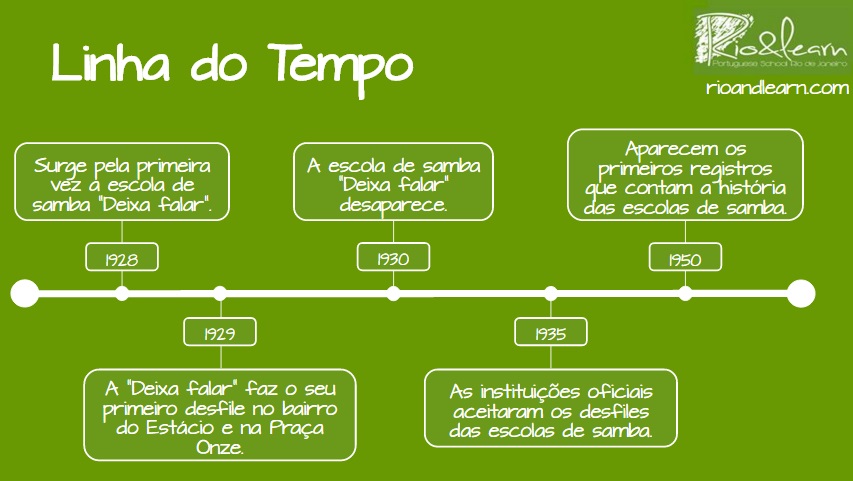 Now that you’ve learned about the first samba school in Brazil, it’s time to put your knowledge to the test and learn some Portuguese along the way. Decide whether the statements below are true of false. Here is some help: why don’t you read this Dica in Portuguese to help you figure out vocabulary.

I hope you enjoyed learning about Deixa Falar – the first samba school in Brazil.
See you in the next Dica!