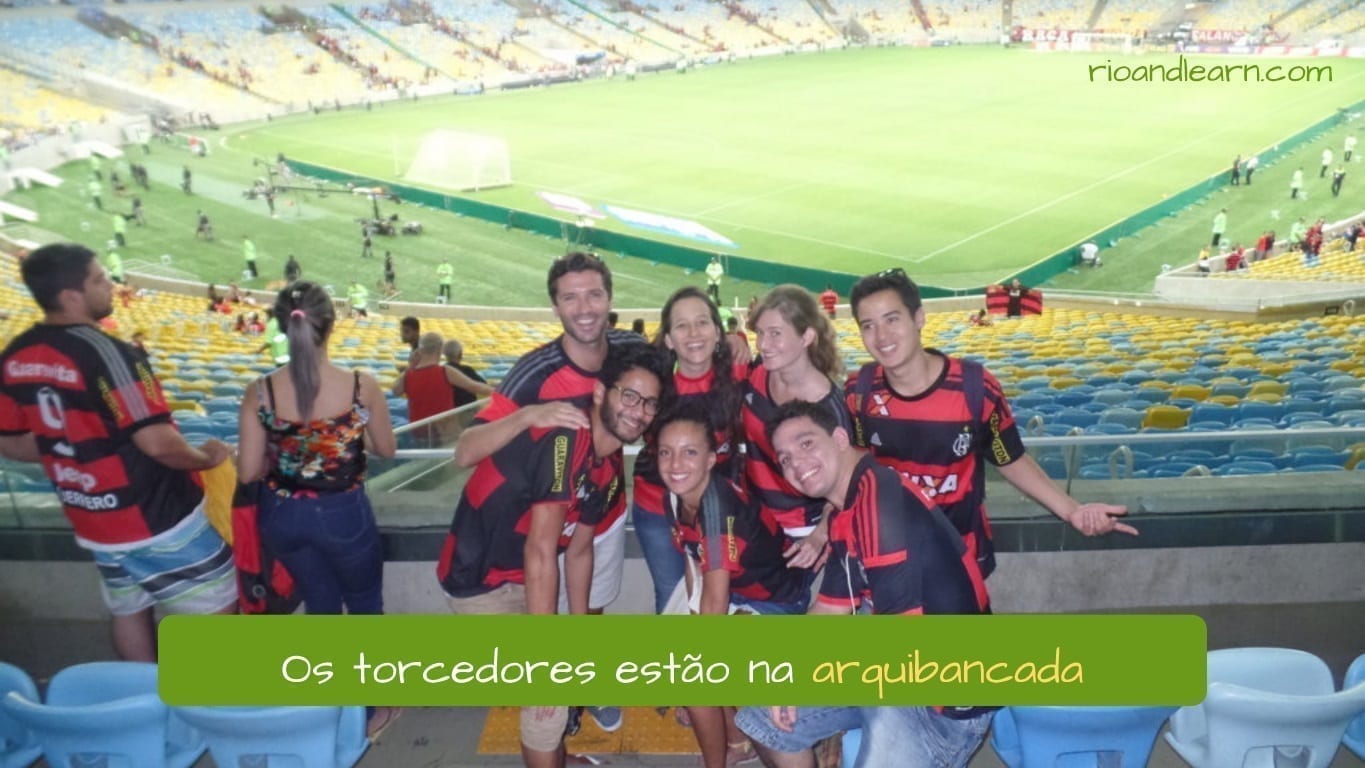 What’s up ! How’s everything? Today in our A Dica do Dia, we are going to learn everything about soccer in portuguese.

You know that football is one of Brazil’s greatest prides, right? Soccer is Brazil’s soul! And today we are going to teach you all about football in Portuguese for you to talk to everyone and become a Brazilian soccer fan!

Parts of the football pitch in Portuguese

Let’s see some videos with our friends Pablo and Diogo teaching us more about it. Now that you have seen the words, let’s practice their pronunciations.

Now let’s take a look at the rules and regulations that the game  must follow in Portuguese, Diogo and Pablo are here to help us out again:

Let’s learn how to say these words:

Besides the parts of the field, characters and features, there is also the uniform and it is divided in parts. Let’s see it my friends!

Are you ready to practice saying it?

Areas of the football stadium in Portuguese

There are stadiums all over Brazil, The Maracanã is the most famous one. But do you know how to say these parts in Portuguese?

Let’s hear how the words sound:

Now that you understand it all, let’s learn how people really talk about soccer in Portuguese: time to learn some slang!

Lots of slang to learn, right?
In 2014, when we had the World Cup in Brazil, we, from Rio & Learn, created many special videos, and one of them was precisely about some of the slang we used. Take a look and let’s learn the correct pronunciation:

Now, let’s take a look at examples using some of the slang we have just learned:

Examples of Soccer Slang in Portuguese

Aquele jogador do Flamengo deu uma caneta no adversário.
That player from Flamengo nutmegged the opponent.

O goleiro daquele time é um frangueiro, nunca agarra a bola e sempre deixa os outros fazerem gol.
The goalkeeper of that team is a sieve, he never stops the ball and always allows the other team to score.

Ele fez um golaço no jogo. Foi muito bonito.
He scored an outstanding goal on the match. It was really beautiful.

Aquele time estava perdendo o jogo e, de repente, ganhou de virada. Foi incrível!
That team was losing the match and, suddenly, they turned the game around and won. It was amazing!

Ele deu um carrinho no outro jogador.
He made a slide tackle on the other player.

To practice even more, we have this new exercise for you. Complete this text about a football match in Portuguese with the words you’ve learned. To help you, here are the words that you’ll need to use:

That’s it!
We have just studied the vocabulary of soccer in Portuguese, now you are ready to talk about football to any Brazilian you meet.

We hope you have enjoyed this Dica and if you want to know more about grammar, expressions and Brazilian curiosities, don’t forget to subscribe to A Dica do Dia.

See you next time!
Hugs!