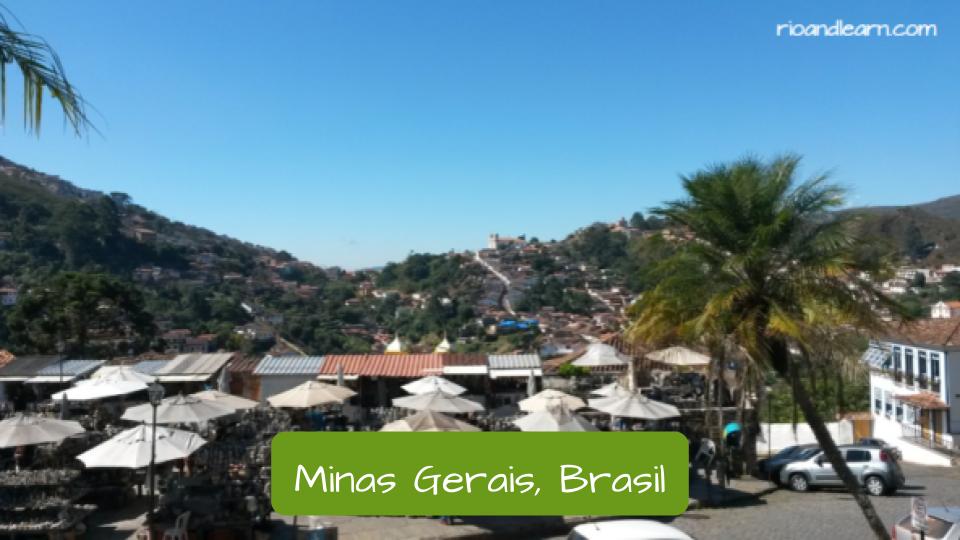 Shall we learn more about Brazil, friends? Our Dica today brings you the history of the state of Minas Gerais, one of the four states that make up the southeast region of Brazil. Belo Horizonte is the capital of Minas Gerais, and is one of our biggest metropolises. We will talk not about only this city but also about other important places in the state, such as Inhotim and Ouro Preto. And we’ll finish by learning about the food from Minas Gerais!

To begin, Minas Gerais is the second most populated state in Brazil with 20,73 million mineiros (inhabitants of Minas), with only the state of São Paulo having more people. It is the fourth biggest state in the country in terms of territory and it is the largest milk and coffee producer in Brazil.

The Origin of this State

When the Portuguese discovered that the region, Minas Gerais was full of gold and precious gems. In 1711, the crown decided to create an exploration site there and named it Vila das Minas Gerais. Vila das Minas Gerais became one of the biggest economic centers in Brazil. Not only was there mining activity but the area also developed agricultural areas to produce milk, coffee, sugar, and many other vital products.

This exploration and development generated insurgency across the region and in 1789, led by Tiradentes, the people started a movement against the Portuguese crown called Inconfidência Mineira. As a result of that movement Minas became a state open to business and could receive investments and still nowadays it is one of the richest states in Brazil.

Curiosity: most of the Brazilian Presidents we have had come from the State of Minas Gerais.

Let’s take a look at the most famous Minas Gerais cities, and what tourist monuments they have to offer! You will see this state has many special things!

Mariana was the first city of Minas Gerais State, founded by Portuguese colonizers. The city is famous for its baroque architecture, mountain climbing, and biking.

This charming little place is very close to the border between Minas Gerais and Rio de Janeiro, which will introduce you to a great mix of the two distinct accents! Conceição de Ibitipoca dates from the 17th century, when gold was discovered in the region and they ended up forming a town.

Another important city in Minas Gerais is Ouro Preto. Ouro Preto is very important from the historical point of view, for sure. That is why UNESCO declared it a World Heritage Site in 1980, due to the collection of historical buildings. The colonial architecture in the city is ancient and well preserved. Wanna know one of the best places to see in Ouro Preto?

The paulistas discovered gold on the slopes of the Serra de São José. Not much later, in 1702, they founded Tiradentes. Therefore, it became a city filled with history and importance.

As well as many of the Presidents, Minas Gerais is also responsible for contributing to Brazil great food, such as: queijo minas, catupiry, the wonderful pão de queijo and the delicious cachaça. Have you ever tried any of these? For those who tried pão de queijo and want to know how to make it, subscribe to our YouTube channel. We’ll teach you in Portuguese 😉

Let’s finish here, friends! Now you know about some of the important places in Brazil, such as Inhotim, Belo Horizonte and Ouro Preto! And you have learned about the amazing Minas Gerais food! If you’re coming to Brazil, do visit this amazing state. You’ll love it!

A big hug from Rio & Learn!